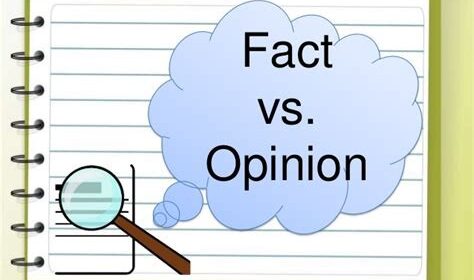 It seems to me that in the last few months opinions expressed in the Post have become more stridently determined to convince us, the readers, to accept opinions as fact.

Misinformation, according to Merriam Webster, is false or inaccurate information, especially that which is to deceive. A common example of misinformation is a rumor that may be eagerly shared as true but still be blatantly false.

Disinformation is false information deliberately and often covertly spread in order to influence public opinion or obscure the truth (think manufactured outrage or a lie).

Both are misleading and serve as a ploy to deceive, whether intentionally or unintentionally.

We all have opinions, but opinions masquerading as facts are not facts.

I agree with Whitney Peckman’s recent “My Turn” response, “More to Read Between the Lines.”

Manufactured outrage masquerading as genuine issues is a problem in our nation, our state, and, yes, even Rowan County as we are subjected to vague “what aboutisms” and deliberate misinformation.

It is time to call out writers who continue to divide us through the guise of religion. Ms. Scheidt has made her opinions widely known, whether in her numerous writings to the Post or in the waiting room at the dentist’s office. Yes, it’s a small town.

I am glad that someone else was offended by Renee Scheidt’s “My Turn.” Thank you, Mrs. Peckman.

Let’s be honest, Ms. Scheidt’s comment about being colorblind is racist on its face.

I am a Black woman. I see color and I can quote scripture and a child’s song and feel good.

Remember “Jesus loves the little children of the world, red, yellow black or …”

I am a product of the 1960s and was fighting for my best life on the planet. It’s called equal rights, and I am sure that Ms. Scheidt has no idea about what it is really like to be judged by the color of her skin.

But say that you were judged by the color of your skin, really? Instead of preaching, practice what you tried to preach in your article. Shakespeare said it best “To thine own self be true.”

“The greatest enemy of positive social change is cynicism about what can be changed.” This recent quote by Robert Reich is a reminder of how democracy can die a slow death if we don’t keep up our long game for the short term. Small things, like letters to the editor and commentary from local residents, can make an impact in Rowan County.

A new VOTERS SPEAK category has been added to the Rowan County Democratic webpage. This new feature, recently discussed at a Dem zoom meeting, will share letters published in the Salisbury Post by local voters who support Dem values. We will also consider other submissions.

As the 2022 election cycle approaches, local Dem supporters can help call out the misinformation and disinformation often found in opinion letters on the editorial page of our local paper. Together we can make a difference with our shared values about important subjects and policy and counter opposing or weak arguments with facts.

Our first round of letters come from folks who were part of the initial zoom discussion. If you are interested in being part of a concerted effort to raise the profile of Democratic values within Rowan County through written words and publication on the Rowan County Democratic webpage, please contact us at votersspeak@rowancodems.com. Basic rules from our Dem discussion group will also apply to letter publication: Healthy debates are natural, but kindness is required. No hate speech or bullying. Take the high ground. This is a Democratic webpage so no letters campaigning or advocating for Republicans will be shared. All letters shared with the RCDP will be with permission from the authors.

Many thanks to all willing to organize your thoughts into a written form that promotes Dem values. As President Biden has reminded us, “We are in a battle for the soul of America.” Yes, even in Rowan County.

NOTE: Letters to the Salisbury Post fall into two categories. Letters to the editor can be short or longer, with a limit of 300 words. My Turn columns have a maximum of 700 words. Writers must email their letters to the editor or submit them digitally using the submission link on the website, unless they are physically unable to do so. Email is letters@salisburypost.com. If you have questions, the Post can be reached at 704-797-4248.

Whitney Peckman: More to read between the lines

For a few weeks now, I have been ruminating on Renee Scheidt’s “My Turn” about racism (“Racism alive and well in Rowan”).

I don’t think it was really about race. I read a carefully written political call to her followers to evince a certain response — ostensibly to do the Christian thing and “apply the words of Christ.” However, between the lines there was a lot of Black/Brown blaming going on.

Let me elucidate: the writer frets, “Quite frankly, being called a white supremacist just because I’m white doesn’t sit too well with me.” Rather than fall for Ms. Scheidt’s indignation, I wondered what she had said to her neighbor in line at Walmart to inspire their comment. Ms. Scheidt continues her Walmart saga by replaying a popular comeback, “That’s irrelevant. I’m colorblind.” And then, comes her call for agreement (or head nodding) from you, dear reader, at her perceived slight: “Is that not being prejudiced?” I don’t think so.

Scheidt continues to make it easier for you to agree and to give you space to pat yourself on the back about the injustices you might have suffered, relating her confidence in the application of the civil rights legislation of the 1960s. Bless her heart.

But then, another shift to her real intent, the reference to “today’s mobs” breeding violence. She didn’t even have to say who she perceived the mobs to be, her statement adroitly placed cheek by jowl with reference to “No longer is the non-violent peaceful protest espoused by Dr. King advocated …” (Should any of us forget about the “mob” that broke into the Capitol on Jan 6? And the “mob” in Charlottesville, Virginia? Or, the white man shooting in the crowd of peaceful protestors right here in Salisbury. Do those count too?)

But, let’s return for a moment to “I’m colorblind.” Are you colorblind, dear reader?

The poet Marshall Gillson said, “I’m so tired of death feeling personal, preparing myself to be an unheralded victim, tell me again that you don’t see color, tell me how it feels to look at the world and see nothing but white.”

Can you imagine saying to Dr. Martin Luther King Jr., “Oh, no sir! I don’t see color!” If you don’t see his color, you deny his experience. You deny his pain. You deny his purpose. Do you really want to do that? Or is it just that you are seeking to escape that which you may fear in yourself? That, perhaps, after all is said and done, there is just this teeny little bit of bad feeling lurking in your heart about Black and Brown people?

Why not take the opportunity in the line at the store to ask what you did to make those Black people think that you think you are superior? (Are they reading your regular columns in the paper and recognizing you from your photos? Or, did you say something or do something to instigate their comment? It seems unlikely to me that they would have simply announced that thought, unprovoked.) Wouldn’t you want to know if you had inadvertently said or done something to cause such a misunderstanding? After all, wouldn’t that have been a simple act of love? Wouldn’t asking how you had hurt them (and then listening to what they had to say) be an act of humility that Christ would favor?

Actions matter. But so do words. What are your actual motivations, Ms. Scheidt? Sounds like political manipulation to me. I dislike it when politicians manipulate readers. And, dear readers, please read carefully (dare I say “critically”) more so now than ever before.

Every Second Saturday of the month we come together to talk about what’s going on in our local community and what we can do to make our community a better place for everyone.

This month we are pleased to have joining us Judge Lucy Inman, who is running for the NC Supreme Court.

So if you have something that you want to bring up with your fellow Democrats, come and join us this Saturday starting at 10 AM. Registration is here: www.tinyurl.com/rowanjan2022

You can also now catch up on all our breakfast gatherings on our Youtube channel: https://www.youtube.com/channel/UCK11FEO94SrHrZkWPY0YLHg

Registration is required to attend. Register here today and the Zoom log-in info will be emailed to you automatically (check your spam or “promotions” folder).

After you register, you will be taken to the county party’s donation page. Please be sure to give a donation online, it’s how we keep these meetings going and fund our organizing efforts throughout the county!

If you can’t attend, but would still like to donate, you can do so here: www.actblue.com/donate/rowanbreakfast

Register here for 10am breakfast, this Saturday, with Dr. Aimy Steele.

Dr. Steele, our featured speaker, is a community activist, organizer, and Executive Director of the New North Carolina Project.

This will be an engaging, empowering, important breakfast with fellow Democrats.

The New North Carolina Project’s mission is to make politics represent the needs of North Carolinians by investing in communities of color, expanding the engaged electorate and creating #VotersForever.

Dr. Steele is a former candidate for NC House District 82 both in 2018 and 2020. Utilizing her extensive K-12 public school operation experience, she began The New North Carolina Project in an effort to increase the electorate and turnout in traditionally Black and Brown communities. Aimy has a Bachelor’s degree in Spanish & K-12 Education, a Master’s in School Administration, and a Ph.D. in Curriculum and Instruction. She resides in Concord, NC with her husband of 22 years, Michael, and their 5 children.

Register now and mark you calendar.

The Rowan County Democratic Party proudly and enthusiastically endorses and supports our fellow Democrats listed below who are running for local town and city councils here in Rowan County. These candidates have shown through their years of tireless work in our communities advocating for our shared community values their commitment to forwarding progressive causes locally, including:

Make a Plan to Early Vote!

The only early voting location for 2021 is at the Rowan County Board of Elections (at the Old Salisbury Mall).

If you don’t want to vote in person, you can now request an vote by mail ballot online by clicking here.

Rowan Dem September Breakfast: “Our Schools: A Vision of Excellence”

Mark your calendars for 10am Saturday, September 11.

His topic: “Our Schools: A Vision of Excellence”