Evelyn Uddin-Khan, Mass Shootings are a Sad Indictment on Humanity; Wake Up America and Smell the Gunpowder 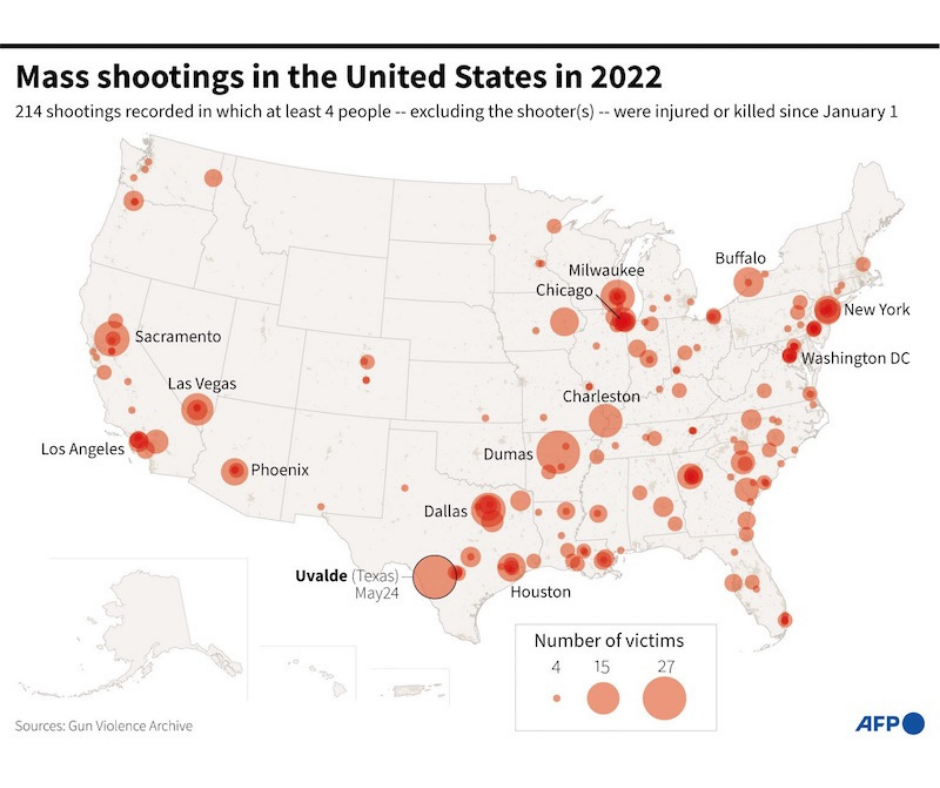 Evelyn Uddin-Khan’s commentaries on the mass shootings in Buffalo and Ulvade question the priorities of the pro-life/pro-gun mentality of many in our country. “We come back to the same destructive elements in our society: guns and racism.”

Commentary following the Buffalo shootings – In our society today, it is easier to buy guns and ammunition than it is to buy an education. It seems as if this boy had more access to guns and death than books and life.

How is it possible for a kid so young to sit and think and make such detailed and destructive plans without due consideration for the aftermath of his actions? How is it that no one knew?

We come back to the same destructive elements in our society: guns and racism.

This country has a population of 331 million people (2020 Census). “The Small Arms Survey” states that US civilians alone account for 393 million guns (Google). It is also believed that people own another 50 million illegal /unlicensed guns.

A country with more guns than people? It is easier to get a gun than to get health care.

We are not safe in churches, in supermarkets, schools, malls, cinemas, ball games, restaurants. Where can we go and take our families? Are we heading for a future of fear?

When is the NRA, Congress and state officials going to wake up and put people before guns? How many more guns do we need to feel safe?

American society is infested with diseases like racism, prejudice, hate, intolerance, and plain dislike for people who are different.

In following this story in the media two things stood out. First, the words that were used to describe the massacre: racially motivated, extremist, white supremacist, hate crime, racial tension, gun violence, live streaming the crime, among others.

Second, 18 year-old Payton wanted to rid America of immigrants, Jews, Muslims, Black and Brown people, Asians, etc. In fact, he wants an America with only white European Americans. (When people say only White blue-eyed Americans, I always ask myself what happens to the Native Americans? Where do they go?)

Can this happen in Salisbury? Would I enter a grocery store one day and not exit?

Can’t we just stop selling guns and start accepting people of all races and religions — because they are all God’s creation.

The Sixth Commandment of Moses states: Thou shalt not kill.

Jesus said: Love your neighbor as you love yourself.

What do you think Ted Arms Dealer Budd?

Commentary following Uvalde shootings – If ever there was an oxymoron in the English language it has to be pro-life, pro-gun. The contradiction is crystal clear. How can anyone believe in life and guns at one and the same time?

We have not quite digested the Buffalo massacre and we now have the blood of babies on our hands in Uvalde, Texas.

Let’s analyze pro-life. Pro is a prefix used before a word to show support for, or in favor of something. So, we are pro-life. We are in favor of life.

And on the other hand, we are pro-gun. We know guns take life. We support arming everyone from teenagers to their grandfathers with guns. Guns take life, whether people’s lives, or birds, or rabbits.

Pro-life and pro-gun makes no sense because guns take lives, and any intelligent person with a good grasp of the English language will be able to distinguish the difference in meaning.

Pro-life leads us back to the abortion issue. Women and girls should not/must not have abortions. God said so. (Where and when?) Didn’t God also say that men should not rape women and incest is a sin?

Now the pro-gun belief. This leads us back to our Second Amendment, which states: A well regulated militia, being necessary to the security of a free state, the right of the people to keep and bear arms, shall not be infringed. (ratified effective Dec. 15, 1791.) The founding fathers wrote this. But where is it written that pro-gun is a constitutional /God-given right that permits 331 million Americans to own 400+ million guns and use them to kill innocent kids?

At this moment in this country every angry lunatic or disgruntled teenager can kill people because he does not like his grandmother or the color of his fellow human beings?

It is time for Americans to wake up and smell the gunpowder.

We the people are living in fear. When are Congress, the elected officials, the people who make and sell guns, the pro-gun folks, going to put people and babies before guns and death?

How many more innocent children sitting in classrooms must die before the pro-gun fanatics realize that we the people are bleeding and hurting and scared to death of our neighbors with guns?

And why are the pro-lifers and the pro-gunners so silent when these heinous massacres occur with such frequency?

We the unarmed cringe and crawl into our holes praying that this is the last massacre and we survived it. And then we pray for the souls of the innocent who died not knowing why the guns were pointed at them.

What kind of life is this when fear of guns surround our every waking moment?

I would be curious to know what our N.C. senators’ views are, and what our mayor of Salisbury and the City Council have to say on the recent tragedies in Buffalo and Uvalde. I would also like to know what Ted Budd (arms dealer) has to say as he is seeking a senate seat.

Politicians, the gun lobby, the NRA, the pro-lifers and the pro-gunners are all going to have to come together and decide whether it is life first or gun death first. Guns spell death.

And the people who sing, “We are pro-life and pro-gun” must realize that they can’t have it both ways. They are either for life or for death. The choice is simple enough. Any sensible person would see the contradiction in terms and realize that pro-life is for life, and pro-gun is for death.