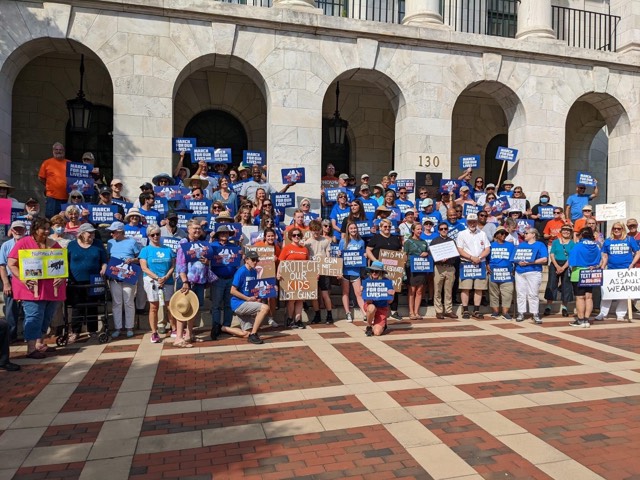 Be Like Nan – Keep Writing! The weekend of June 12th saw demonstrations across our nation, including a March for Our Lives in Salisbury on Sunday. Also on Sunday, the Senate announced a bipartisan 20 senator agreement in principle, although not on written legislation, to support limited legislation on school safety and gun measures. Continue to raise your voices and support your beliefs. Talk to your neighbors, share factual information, call your elected officials, write letters, and GET OUT THE VOTE! https://www.npr.org/2022/06/12/1104433332/gun-control-senate-deal

How many legislators have their children or grandchildren in public schools? How many of them do their own grocery shopping? How many have sat in a synagogue or mosque? How many go to malls or movie theaters? How many know what it is to live in fear because of the color of their skin or their dangerous neighborhood? How many have armed protectors around them wherever they go to keep them and their families safe?

They live in a different world than the families in Uvalde, Buffalo, Charleston, El Paso, Las Vegas, Orlando, Blacksburg VA, Newtown CN, and other places devastated by carnage from guns.

Most of the 221 mass shootings, including 27 school sites, that have occurred in the US so far in 2022 never reach the public attention because they are not one of the “big 30, those with the largest number of deaths.

I lived and taught in Buffalo for over 30 years. I had colleagues and students who lived in the section of the city where the Tops massacre happened. My son teaches in a Buffalo public school, mostly with black and brown children. I can no longer feel that the danger is not in my town.

My other son worked as a Physician Assistant in Uvalde. I went to his wedding there and was struck by the gun-and-liquor stores and the private park where hunters could shoot exotic animals. Gun culture is invasive.

How many Republican legislators who offer thoughts and prayers but oppose any sane gun safety laws get money from the NRA? 42. Guess who is near the top of the list? #2 is Richard Burr with $7 million and #4 is Tom Tillis with over $4 million. Wake up North Carolina! When we send a gun dealer to the Senate, we are contributing to the